Haiti National Conference
We have nearly 30 churches spread throughout Haiti. They became affiliated with us in 2000. In 2002, the second national convention of United Brethren in Haiti brought over 600 people to Port au Prince.

For many years operated as a mission district under the supervision of thE United Brethren Church in Canada.Canada provided substantial financial support and regularly sent work teams to Haiti. In 2019, the churches of Haiti organized as a national conference.

Rev. Jean Louis Supreme (right) serves as the on-the-ground superintendent. He was elected in 2019; he had a long history with the United Brethren and was well respected by the churches,

In the 1990s, Rev. Oliam Richard, pastored a successful Haitian church in Paris, France. However, he felt called to return and work in his native land of Haiti. He soon found himself supervising a group of churches in Haiti, and he wanted to get them affiliated with a larger group.

Rev. Richard learned about the United Brethren church through the denominational website. Contacts were made. In October 2000, Global Ministries officially decided to launch into Haiti. Rev. Richard moved back to Haiti to personally supervise the Haitian churches.

Haiti is about the size of Massachusetts, and has about 8.5 million people.French is spoken by most educated Haitians and is used in business. Nearly everyone speaks Creole, which combines influences from Africa, France, and Spain. 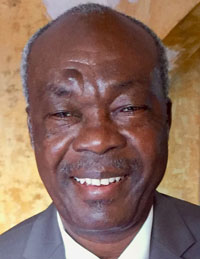 Rev. Jean Louis Supreme is superintendent of our churches in Haiti.

The History of Haiti

Haiti, in the West Indies, occupies the western third of the island called Hispaniola; the Dominican Republican occupies the eastern part. Two-thirds of Haiti is mountainous.

Christopher Columbus landed on Haiti in 1492 and claimed the island for Spain. The Arawak people, natives of Haiti, were conquered and ruled by Spain until 1697, when it became a French colony called Saint Dominique.

Due to bankruptcy within the government and extreme poverty among the people of Haiti, the country accepted being under US supervision from 1905 until 1941.

Haiti has long been one of the poorest, least-developed countries in the western hemisphere. Many dictators have ruled over the years, causing much unrest and poverty. Though Haiti now operates under an elected government, it still has high AIDS, malnutrition, and infant morality rates.