Guatemala Conference
Guatemala National Conference was officially created on January 12, 2010, when the General Conference delegates approved their application for membership in the Church of the United Brethren in Christ International. At that time, they included 13 churches with a combined attendance of around 600. The year before, they had recorded 176 conversions.

All 13 churches had their own pastor, three of whom were ordained, and 11 chuches owned their own property. Children’s ministries existed in every church. Some new churches started when members relocated; others started through friendships they developed with other Christians who have now joined them and accepted the United Brethren vision.

Like many of our Central American ministries, most of the UB churches in Guatemala minister to the poorest of the poor.

These churches trace back to 1997 when two families began meeting in their homes. The movement grew through extensive evangelism and the development of lay leaders, but lacked two things:

In 2000, a leader from the UB church in Masaya, Nicaragua, stopped in Guatemala for a few days while on his way to Mexico. He became acquainted with these churches, and they inquired about the United Brethren denomination. One thing led to another, and Juan Pavon, superintendent of Nicaragua Conference, received an invitation to come visit Guatemala. Juan spoke to them about United Brethren doctrine and the way we work, and they liked what they heard. Things took off from there.

The Guatemala churches became a mission district under the supervision of Nicaragua Conference, and then became a national conference in 2010. 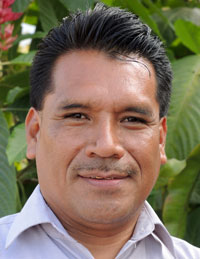 Rev. Jaime Chun is the superintendent of Guatemala Conference.

Guatemala is about the size of Tennessee. Its 13 million people are about 60% Catholic and 40% Protestant (mostly evangelicals and Pentecostals). It has the lowest literacy rate in Central America.

The History of Guatemala

Guatemala was home to impressive civilizations long before the Spanish arrived. The Kan Kingdom included 26 cities, all connected by highways built 2-4 meters above the ground and paved with stucco. The Mayan civilization included a number of independent city-states. After the Mayan empire collapsed around 900 AD, a number of regional kingdoms arose.

The Spanish explored Guatemala beginning in 1519. Diseases brought from Europe decimated the native populations. The entire region fell under Spanish domination for the next 300 years.

Guatemala, along with four other Central American nations, declared independence from Spain in 1821. The country struggled through the years under various political alignments and a string of dictatorships and military juntas, never able to achieve stability.

A civil war ended in 1996 with a peace accord between several guerilla groups and the government. Since then, Guatemala has experienced successive democratic elections.